Mostar is situated on the Neretva River and was named after the bridge keepers “mostari” who guarded the Stari Most (Old Bridge) over the Neretva. The Old Town, spanning both sides of the Neretva, contains most things of interest in Mostar, and in its center is the Old Bridge, the Mostar’s indisputable visual focus. Originally built by Suleiman the Magnificent in the 15th century. The Old Bridge is one of Bosnia and Herzegovina’s most recognizable landmarks and is considered one of the most exemplary pieces of Islamic architecture in the Balkans. Mostar is rich in culture, history, and beautiful buildings. Whether you plan to visit on a day trip from Split, Mostar is definitely worth a visit.

How to get from Split to Mostar in a day?

Simply book your day trip Split to Mostar with your own driver-guide. After we pick you up at the place of your accommodation in Split, we’ll begin our drive to Mostar. Together with our driver-guide for Mostar’s private tour, enjoy the panoramic ride towards Bosnia & Herzegovina country. You’ll also be connected thanks to our free WiFi access on board. Prices for a day trip to Dubrovnik are as low as 320 Euros (price is per vehicle not per person). Our service and quality are available on the TripAdvisor profile. Give us a try and experience it for yourself!

Combine the highlights of Bosnia and Herzegovina’s country. Join us on a guided day trip Split to Mostar and Kravice waterfalls. With a driver-guide for Mostar in the lead, you can focus on sightseeing along. Landmarks include Mostar and Kravice Waterfalls. We’ll start from the delta of the Neretva river and discover the picturesque town of Mostar. In Mostar, you will see a coexistence of cultures between Muslims, Christians, and Jews. While strolling around the historic core of Mostar with a local guide, have a first-hand experience of the famous medieval town. You’ll see the iconic Old Bridge attracts tourists from all over the world. If you’re lucky, you might even catch Mostar divers jumping from the bridge into the chilly river below; a tradition since 1968.

Surrounded by steep mountains and vivid nature, Mostar is a town where architecture and different cultures have met and left their mark through history. With a local tour guide, you will visit the Old Baazar filled with old-fashioned shops and workshops, the Mosque and the magnificent Stari Most, (the Turkish Old bridge), the town’s most famous landmark which is dating from the 16th century and is the. You will have free time for a leisure walk, shopping, or tasting some authentic Bosnian specialties. Mostar’s Old Town is fairly compact so a day trip from Split will give you enough time to enjoy the highlights of the city.

Stari Most is a 16th century, Ottoman-style bridge and Mostar’s most notable architectural landmark. Stretching 28 meters across the Neretva river and connecting the Croatian and Muslim sides of the city, the iconic Old Bridge attracts tourists from all over the world. This UNESCO World Heritage site is a symbol of tolerance and a reminder of the Bosnian war. Stari Most proudly stood there for 427 years, until it was destroyed in 1993 during the Bosnian War. Thanks to post-war restoration efforts, a new bridge was built in 2004. Take a moment and watch brave yet talented local men dive off the bridge, plunging 20 meters into the cold river below. The practice of diving off the bridge started back in 1664 and became a tradition for the young men of Mostar. In 1968, the city even held a formal diving competition, which still continues today.

After departing Mostar but before crossing the border back into Croatia, it’s worth taking the time to stop at Kravice Waterfall and enjoy a swim in the waterfalls if the weather allows it. Descending into the valley of the Trebizan river, these 25-meter waterfalls shape emerald pools, which make for an outstanding natural attraction. Don’t miss this once-in-a-lifetime opportunity to swim under the waterfalls and recharge before heading back to Split.

Simply book your day trip from Split to Mostar with your own driver guide and luxury vehicle. Prices start as low as 320 euros. 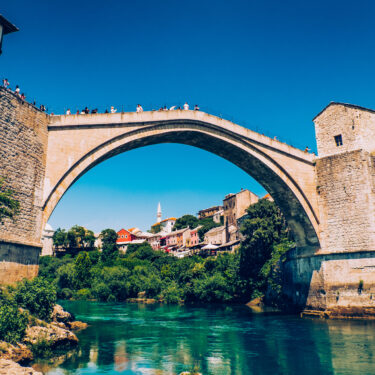 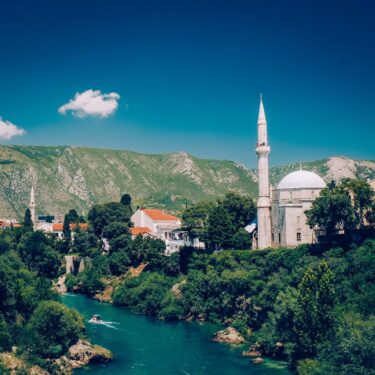 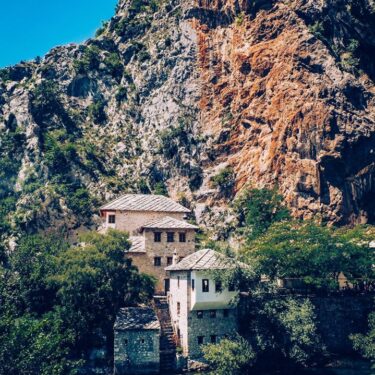 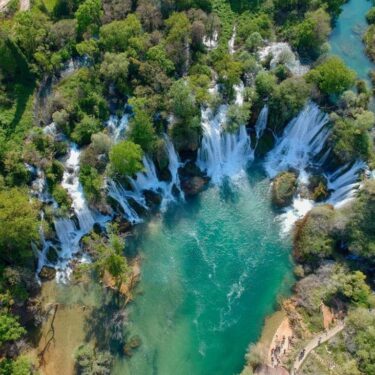 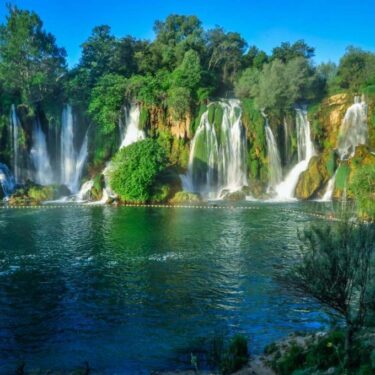